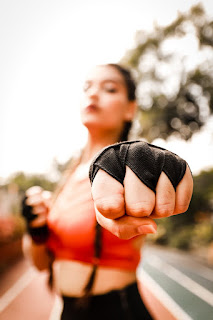 Every now and again, images of defense-of-self flash through my mind. Usually, they are escape scenarios punctuated by me gaining the upper hand and subduing a faceless person out to do someone harm (and usually, that someone is me or a loved-one). Normal stuff for folks who study or teach martial arts or self-defense, I suppose.

Lately, though, assailants in my day dreams aren’t so faceless. And they aren’t happening after random, surprise attacks from a bad person springing from the bushes. Lately, every attacker has identifiable features and each one looks a lot like folks I come in contact with on a regular, or at least know on some level. They are folks that are causing a lot of havoc and chaos in my world.

It’s truly funny how the mind works – because each scenario ends the same way: with my left hand wrapped firmly around their throat and my right hand cocked back, aimed at their nose or left eye. I never hit, but that the intent to neutralize them and stop their attack is on full-throttle.

Physical harm is not actually being done to me and mine, really - but my head is looking for ways to stop the crazy before it gets out of control, it seems. I am far from a violent person (save for class or the competition ring, the only fight I’ve ever had was in second grade and the only physical altercation as an adult occurred about 10 years ago [read about it here). My weapons outside of the ring have been words. As a writer, I’ve had ample opportunity to give a verbal beat-down or two (hundred). As a journalist, I’ve found the facts to let people draw their own conclusions about corruption, murder-suicides, and other wrongdoing. Words have always served me well.

I think my fear is that although I know wrong is being done, there will never been an opportunity to voice the "You know, what you're doing is offed up, right?" to the offender and be heard. That’s why my mind is working through on-the-mat scenarios, trying to find some semblance of order in a “put up your dukes” way.

My actual physical default is not to raise my hands, but my dream self has other plans, it seems.